For fun, for fitness or for the social, whatever your reason for choosing to play beach volleyball, it's super easy to get started.

This young and vibrant sport is on the up, and their are opportunities to play casually, in a club environment, or competitively. 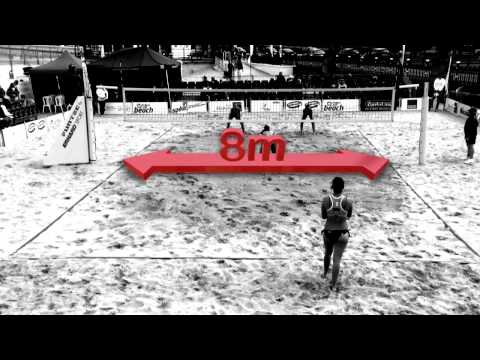 Beach volleyball is usually played between two teams of two players, but it can be played by more.

The aim of the game is to stop the ball from landing on your side of the court whilst trying to ground the ball on your opponent’s side. Each side is allowed a maximum of three touches before the ball must be hit over the net.

Matches are decided by a team winning 2 sets, which are won by a team reaching 21 points with a 2-point advantage.

Grab a volleyball and head to the beach with your friends and family to get a taste of what this simple yet supreme sport is all about.

Specialists Sportset stock a range of Mikasa beach volleyballs, as well as clothing and net systems, to get you started.

If you want to do more than just rock up to the beach, check out the yellow umbrella icons on our venue finder below to locate beach volleyball courts near you.

For the more experienced player. The ever-expanding UK Beach Tour includes 1, 2, 3-star and Grand Slam competitions for senior and junior players at locations all over the country.